Mapbox vs Google Maps — What are the differences? 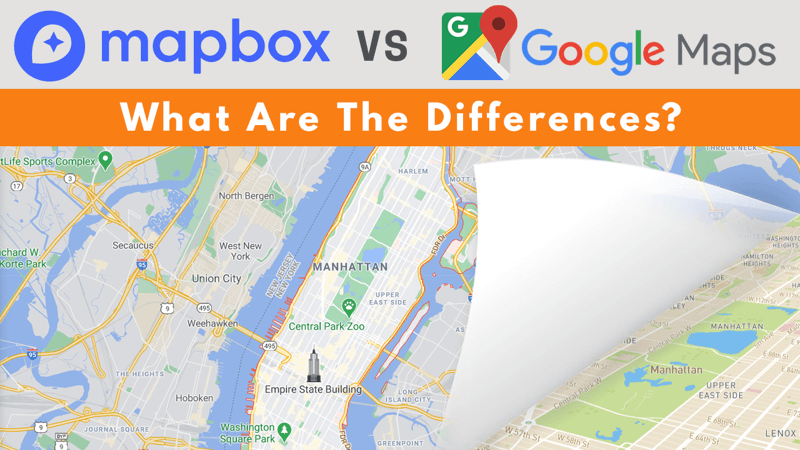 For years Google Maps has been an unmatched map provider. However, in recent years a lot of other map APIs have introduced and they are giving Google Maps tough competition.

Is Mapbox better than Google Maps? The question is a bit tricky since it depends on the needs of your specific application and features. In this article, we will look closer at how Mapbox compers with Google Maps and where it has an edge.

Mapbox was founded in 2013 and currently is considered one of the tech unicorns - as of October 2020, Mapbox had a valuation of $1 billion.

The data is taken from open data sources, such as OpenStreetMap, Microsoft Open Maps, Wikidata, and data vendors for certain geographic areas.

Layers and features that come from OpenStreetMap, can be edited and added directly in OpenStreetMap and you will eventually see your changes reflected on your Mapbox map.

Who is Using Mapbox?

The Mapbox gained popularity when Google decided to monetize its Maps API and raised its prices by more than 1,400%. This makes google maps API not the best option for many of the large companies and they start looking for other options.

Currently, apps such as Shopify, Facebook, Pinterest, Foursquare, DHL, DPDgroup, Grubhub, Instacart, and Airbnb are all powered by Mapbox. This can be attributed to its pricing model that is more attractive for large numbers of map requests.

Many uses chose Mapbox over Google Maps for its esthetics. Mapbox Studio is like Photoshop for maps where designers have control over everything from colors and fonts, to 3D features and camera angles, to the pitch of the map as a car enters a turn. This allows building beautiful experiences and drive engagement in consumer apps.

How do Mapbox and Google Compare?

There are a lot of similarities between Mapbox and Google maps, and because of these similarities, we can compare both the services and see which can suit your business better according to your needs.

No doubt Google maps is the pioneer in the mapping industry and has been leading it for years, but as discussed above after changing its pricing structure companies are looking at other options also.

Let’s compare some of the major functionalities and features provided by Google Maps and Mapbox.

Both Google Maps and Mapbox support the idea of customization, but customization is the main strength of Mapbox.

Google map is a bit strict or we can say less flexible when it comes to customization. Google Maps enforce you to use its default base layer, on the other hand, there is no such restriction on Mapbox.

Mapbox also provides a built-in Map Editor named TileMill, it is a paid service but will have access to the map libraries and the ability to upload custom style. Mapbox went a bit farther with this. It opens its entire platform for customization.

You can use Mapbox Studio – a powerful tool where you can customize your map, create re-usable datasets. You can get very granular with styling and create unique designs.

One of the most useful features of online maps is the Map Markers. Business applications want to make it easier for the users as much as possible by adding different locations and markers depending on the app’s nature.

Both Google Maps and Mapbox provide a map marker feature. Mapbox uses a library for mapping known as SuperCluster for both iOS and Android. Google map also has a mapping cluster but if compared to Mapbox, it has limited features of styling.

If we talk about the performance of map markers, there are several complaints that Google Maps API couldn’t render a large number of markers at a single time and also shows UI performance issues such as rendering speed and smoothness while zooming the maps. In contrast, Mapbox shows better performance, as it uses vector tiles and provides a very flexible API Mapbox GL JS.

However, Mapbox GL JS is still fairly new to developers, there will inevitably be a steep learning curve at first in getting a handle on how data flows.

Google Maps and Mapbox, both have auto-suggest features in the search functionality. Both these APIs allow the users to search for different locations either by using the coordinates i.e latitude & longitude or by entering the place name in the search bar.

Mapbox autocomplete suggestion feature is said to be more efficient as compared to Google Maps API. The point to be noted here that the search feature in Mapbox API is totally free while in google maps you have to pay after a certain limit.

Talking about the direction and built-in navigation, both the APIs have an efficient mechanism that allows you to provide navigation services to the users within your app.

One of the advantages of using these APIs is that you also get their associated services. Both Google Maps and Mapbox API have some services that came along when you use their API.

Google Maps API includes a variety of services like Satellite Imagery and Street View. All these features add to the usefulness of this map API. As yet, Mapbox still needs to develop and include add-ons.

Mapbox aims to provide an open-source platform and uses data from OpenStreetMap. Its map data and API services are not as rich as Google Maps.

Both of the services are free up to an extent and after that, they start charging. The pricing model for these APIs is a bit tricky, the pricing model of Google API is based on the usage or requests while Mapbox API provides different pricing options for individual users.

Google Maps is more expensive with Dynamic Maps priced at $7 per 1,000 requests.

While both Google Map and Mapbox APIs are providing great features and functionalities to the users, although it is difficult to give a verdict about which API is better than the other, the Mapbox API is clearly ahead of Google maps API in terms of performance and customization.

However, the selection of API is solely based on the nature of your business application and its need. Without any doubt, Google Map API is the leader in the area as it is operating for years and is more reliable, but, Mapbox API is not far behind and is providing great rendering performance and customization with reasonable pricing.