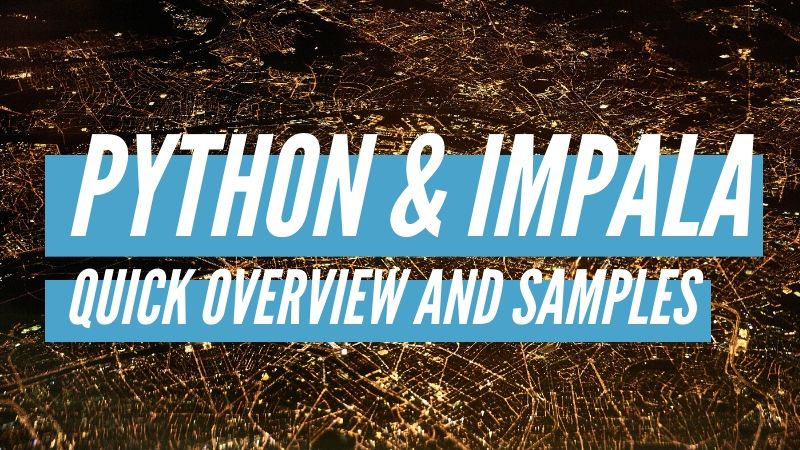 When last we dove into the world of Big Data we spoke about its implementation with Python and Hive. Plus how that combination could be used to develop really to bust the plications.

Today we would like to switch gears a bit and get our feet wet with another BigData combo of Python and Impala. The reason for this is because there are some limitations that exist when using Hive that might prove a deal-breaker for your specific solution. Impala might be a better route to take instead.

To begin we have to understand a few core concepts Map-Reduce all the way to an overview of impala before we take a quick glance at some python-Impala coding.

First on our list of concepts is Map Reduce. Simply stated, it is a software framework and programming model used for processing huge amounts of data. MapReduce programs work in two phases, namely, Map and Reduce. Map tasks deal with splitting and mapping of data while Reduce tasks shuffle and reduce the data.

The input to each phase is key-value pairs. Plus, every programmer needs to specify two functions: map function and reduce function.

The whole process goes through four phases of execution:

This is further divided into tasks. There are two types of tasks:

The complete execution process (execution of Map and Reduce tasks, both) is controlled by two types of entities called a

Jobtracker: Acts like a master (responsible for the complete execution of submitted job)

Multiple Task Trackers: Acts like slaves, each of them performing the job For every job submitted for execution in the system, there is one Jobtracker that resides on Namenode and there are multiple task trackers which reside on Datanode.

Next on our list is Tez. What it does is to generalize the MapReduce paradigm to a more powerful framework based on expressing computations as a dataflow graph. Tez is not meant directly for end-users – in fact, it enables developers to build end-user applications with much better performance and flexibility. Hadoop has traditionally been a batch-processing platform for large amounts of data. However, there are a lot of use cases for the near-real-time performance of query processing. Tez helps Hadoop address cases which are not well suited for Map-Reduce.

Now we need to have a brief look into MPP (massively parallel processing). It can be stated to be the coordinated processing of a program by multiple processors that work on different parts of the program, with each processor using its own operating system and memory. Generally, MPP processors communicate using some messaging interface. In some executions, up to 200 or more processors can work on the same application. An "interconnect" arrangement of data paths allows messages to be sent between processors. Generally, the setup for MPP is more tricky, requiring thought about how to partition a common database among processors and how to assign work among the processors. An MPP system is also known as a "loosely coupled" or "shared nothing" system.

An MPP system is considered better than an asymmetrically parallel system ( SMP ) for applications that allow a number of databases to be searched in parallel. These include decision support systems and data warehouse applications.

Now to the crux of our content. Impala is an MPP (Massive Parallel Processing) SQL query engine for processing huge volumes of data that is stored in a Hadoop cluster. It is an open-source software which is written in C++ and Java. It provides high performance and low latency compared to other SQL engines for Hadoop.

In other words, Impala is the highest performing SQL engine (giving RDBMS-like experience) which provides the fastest way to access data that is stored in the Hadoop Distributed File System.

Impala combines the SQL support and multi-user performance of a traditional analytic database with the scalability and flexibility of Apache Hadoop, by utilizing standard components such as HDFS, HBase, Metastore, YARN, and Sentry.

With Impala, users can communicate with HDFS or HBase using SQL queries in a faster way compared to other SQL engines like Hive.

Impala can read almost all the file formats such as Parquet, Avro, RCFile used by Hadoop.

Unlike Apache Hive, Impala is not based on MapReduce algorithms. It implements a distributed architecture based on daemon processes that are responsible for all the aspects of query execution that run on the same machines.

Thus, it reduces the latency of utilizing MapReduce and this makes Impala faster than Apache Hive.

Understanding what your solution requires is a critical criterion for selecting either to go with a Hive implementation or one that is dependent on Impala. However, there are differences to note between the two.

Impala has been shown to have a performance lead over Hive by benchmarks of both Cloudera (Impala’s vendor) and AMPLab. Benchmarks have been observed to be notorious about biasing due to minor software tricks and hardware settings. However, it is worthwhile to take a deeper look at this constantly observed difference. The following reasons come to the fore as possible causes:

Cloudera Impala being a native query language avoids startup overhead which is commonly seen in MapReduce/Tez based jobs (MapReduce programs take time before all nodes are running at full capacity). In Hive, every query has this problem of “cold start” whereas Impala daemon processes are started at boot time itself, always being ready to process a query.

Hadoop reuses JVM instances to reduce startup overhead partially but introduces another problem when large haps are in use. Cloudera benchmark has 384 GB memory which is a big challenge for the garbage collector of the reused JVM instances.

Hive is batch-based Hadoop MapReduce whereas Impala is more like an MPP database.

Hive supports complex types but Impala does not.

Here is a list of some noted advantages of Cloudera Impala.

But as to everything, there are some notable downsides:

Limitation of HDFS based tables

Lots of small files Namenode holds data about file location in the HDFS cluster. If there are too many files, Namenode will not have enough memory to store such metadata about each file. We will learn about HDFS architecture in the next tutorial.

Arbitrary data modification Hadoop distributed file system does not support updating data once it is written. We can append data to the end of files but modifying arbitrary data is not possible in HDFS. Hence application which needs data

Kudu is a columnar storage manager developed for the Apache Hadoop platform. Kudu shares the common technical properties of Hadoop ecosystem applications: it runs on commodity hardware, is horizontally scalable, and supports the highly available operation.

It's feature set include:

Impala + KUDU fast RDBMS like a solution for Big-Data analytics

Kudu is well integration with Impala, such that it allows you to use Impala to insert, query, update, and delete data from Kudu tablets using Impala's SQL syntax, as an alternative to using the Kudu APIs to build a custom Kudu application. Plus, you can use JDBC or ODBC to connect existing or new applications written in other languages, frameworks, or business intelligence tools to your Kudu data, using Impala as the broker.

We use the Impyla package to manage Impala connections.

Unlike HDFS tables, KUDU tables allow us to have primary key constraint and establish effective data distribution across partitions / buckets.

Proper partitioning can significantly speed up access / search data, so you should pay attention to the correct partitioning /bucketing strategy

Using Ibis with Impala and Kudu:

You can issue SELECT, INSERT, DELETE, and UPDATE queries on data in Kudu tables via Impala, but for now only SELECT and INSERT operations are available from Ibis.

The Impala client's Kudu interface has a method create_table which enables more flexible Impala table creation with data stored in Kudu. This includes: